We live in a world of objects. These objects exist in nature, in man-made entities, in business, and in the products that we use. They can be categorized, described, organized, combined, manipulated and created. Therefore, an object oriented view has come into picture for creation of computer software. An object. oriented approach to the development of software was proposed in late 1960s. 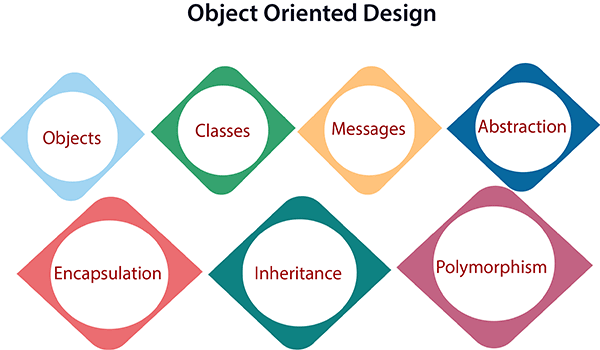 Object-Oriented development requires that object-oriented techniques to be used during the analysis and implementation of the system. This methodology asks the analyst to determine what are the objects of the system, how they will behave over time or in response to events, and what responsibilities and relationships an object has to other objects. Object-oriented analysis has the analyst look at all the objects in a system, their commonalties, difference, and how the system needs to manipulate the objects.

The Object Oriented Methodology of Building Systems takes the objects as the basis. For this, first the system to be developed is observed and analyzed and the requirements are defined as in any other method of system development. Once this is done, the objects in the required system are identified. For example in case of a Banking System, a customer is an object, a cheque book is an object: and even an account is an object.

System Design: System Design is the next development stage where the overall architecture of the desired system is decided. The system is organized as a set of subsystems interacting with each other. While designing the system as a set of interacting subsystems, the analyst takes care of specifications as observed in system analysis as well as what is required out of the new system by the end user.

Object Design: During this phase, the details of the system analysis and system design are implemented. The Objects identified in the system design phase are designed. Here the implementation of these objects decided as the data structures get defined and also the interrelationships between the objects are defined.

Let us here deviate slightly from the design process and understand first a few impoltant terms used in the Object-Oriented Modeling.

As already discussed, Object Oriented Philosophy is very much similar to real world and hence is gaining popularity as the systems here are seen as a set of interacting objects as in the real world. To in Iplement this concept, the process based structural programming is not used; instead objects are created using data structures. Just as every programming language provides various data types and various variables of that type can be created, similarly, in case of objects certain data types are predefined. For example, we can define a data type called pen and then create and use several objects of this data type. This concept is known as creating a class.

Class: A class is a collection of similar objects. It is a template where certain basic characteristics of a set of objects are defined. The class defines the basic attributes and the operations of the objects of that type. Defining a class does not define any object, but it only creates a template. For objects to be actually created instances of the class are created as per the requirement of the case.

Abstraction: Classes are built on the basis of abstraction, where a set of similar objects are observed and their common characteristics are listed. Of all these, the characteristics of concern to the system under observation are picked up and tile class definition is made. The attributes of no concern to the s stem are left out. This is known as abstraction. The abstraction of an object varies according to its application or instance, while defining a pen class for a stationery shop, the attributes of concern might be the pen color, ink color, pen type etc., whereas a pen class for a manufacturing firm would be containing the other dimensions of the pen like its diameter, its shape and size etc.

Inheritance: Inheritance is another important concept. A new type of class can be defined using a similar existing class with a few new features. For instance, a class vehicle can be defined with the basic functionality of any vehicle and a new class called car can be derived out of it with a few modifications. This would save the developers time and effort as the classes already existing are reused without much change.

Implementation: In this phase, the class objects and the interrelationships of these classes are translated and actually coded using the programming language decided upon. The databases are made and the complete system is given a functional shape.

The complete object oriented methodology revolves around the objects identified in the system. When observed closely, every object exhibits some

characteristics and behavior. The objects recognize and respond to certain events. For example, considering a Window on the screen as an object, the size of the window gets changed when resize button of the window is clicked. Here the clicking of the button is an event to which the window responds by changing its state from the old size to the new size.

While developing systems based on this approach, the analyst makes use of certain models to analyze and depict these objects. The methodology supports and uses three basic Models:

Object Model – This model describes the objects in a system and their interrelationships. This model observes all the objects as static and does not pay any attention to their dynamic nature.

Dynamic Model – This model depicts the dynamic aspects of the system. It. portrays the changes occurring in the states of various objects with the events that might occur in the system. Functional

While the Object Model is most important of all as it describes the basic elements of the system, the objects, all the three models together describe the complete functional system.

As compared to the conventional system development techniques, object oriented modeling provides many benefits. Among other benefits, there are all the benefits of using the Object Orientation. Some of these are:

Inheritance – The concept of inheritance helps the programmer use the existing mode in another way, where making small additions to the existing classes can quickly create new classes.

Programmer has to spend less time and effort and can concentrate on other aspects of the system due to the reusability feature of the methodology.

Data Hiding – Encapsulation is a technique that allows the programmer to hide the internal functioning of the objects from the users of the objects.