Microwave Transmission :- Above 100 MHz, the waves travel in straight lines and can thus be narrowly focused. Concentrating all the energy into a small beam using a parabolic antenna (like the satellite TV dish) gives a much higher signal-to-noise ratio, but the transmitting and receiving antennas must be accurately aligned with each other.

Before the advent of fiber optics, these microwaves formed the heart of the long-distance telephone transmission system. In order to overcome the problems of line-of-sight and power amplification of weak signals, microwave systems use repeaters at intervals of about 25 to 30 km in between the transmitting and receiving stations.

Unlike radio waves, at lower frequencies, microwaves do not pass through buildings well. In addition, even though the beam may be well focused at the transmitter, there is still some divergence in space.

Some waves may be reflected off low-lying atmospheric layers and may take slightly longer to arrive than direct waves. The delayed waves may arrive out of phase with the direct wave and thus cancel the signal. This effect is called multipath Fad ing. It is often a serious problem in microwave communication systems.

Since microwaves travel in a straight line, if the towers are too far apart, the earth’s curvature will get in the way. Consequently, repeaters are needed periodically. The higher the towers, the further apart they can be. The distance between repeaters goes up very roughly with the square root of the tower height. For 100-meter high towers, repeaters can be spaced 80 km apart. 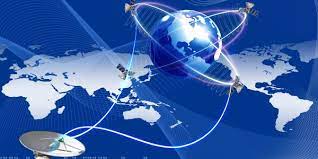 (a) Microwave is inexpensive as compared to fiber optics system. For example, placing up to two simple towers and antennas on each side may be cheaper than burying 50 km of fiber through a congested area.

(b) Microwave systems permit data transmission rates of about 16 Gigabits per second (1 Giga = 10). At such high frequencies, microwave systems can carry 250,000 voice channels at the same time. They are mostly used to link big metropolitan cities which have heavy telephone traffic between them.